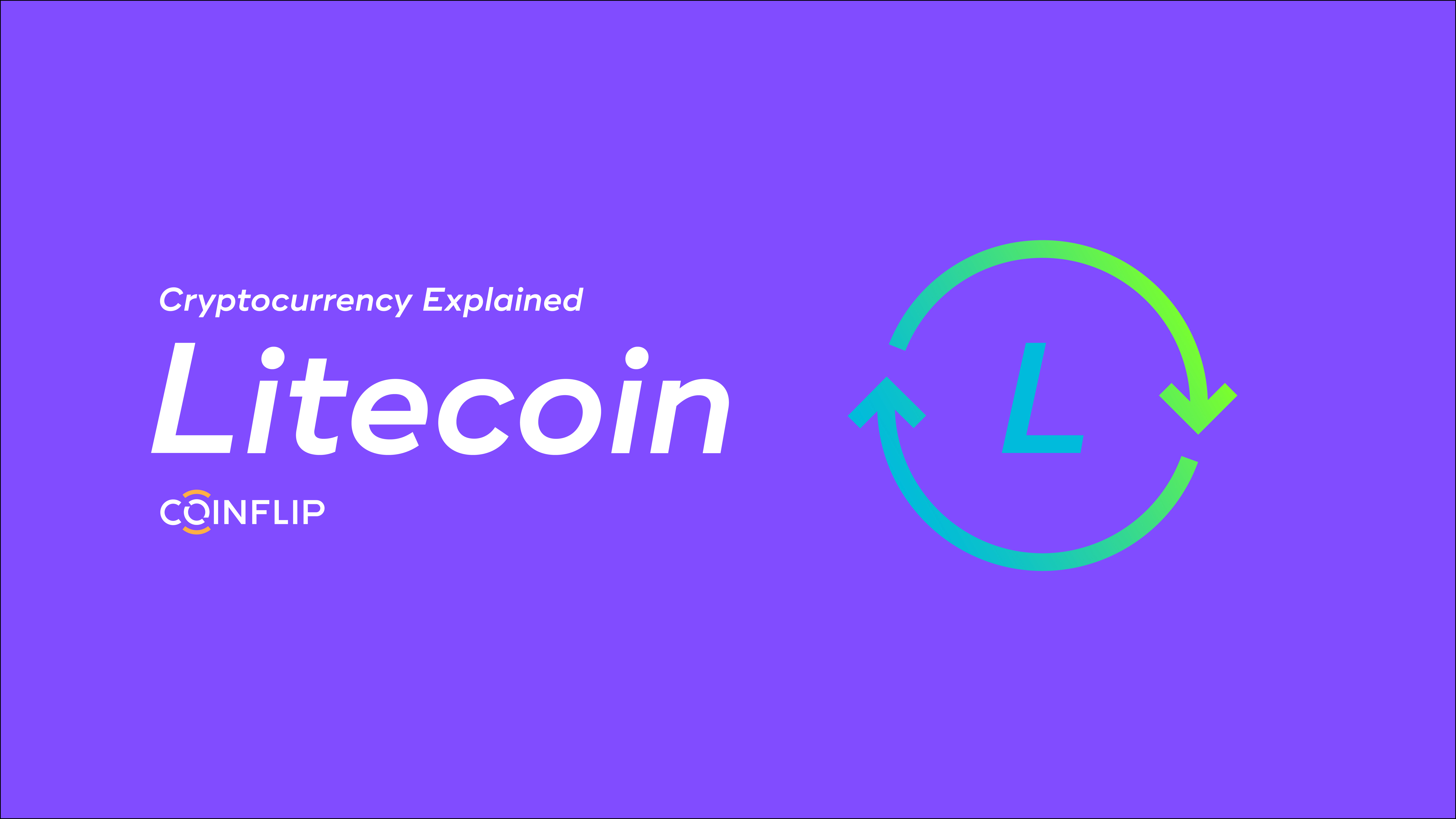 Anyone looking to buy cryptocurrency should have a good understanding of what it is. With CoinFlip's *Cryptocurrency Explained* series, we break down the inner workings of blockchain technology, the different coins available, and more. Today, we're looking at Litecoin.

Have you ever tried to send money to another country? Or between two bank accounts? If you have, you know that sometimes it can take days. Wire transfer fees within the US can be between $25 - $30, and worse, between $45 - $50 for international transfers. If this headache sounds familiar to you, Litecoin could be your saving grace.

Litecoin is a digital currency that uses peer-to-peer technology to quickly send payments anywhere in the world. It’s 4x faster than Bitcoin and averages 30 minutes to complete each block with a very low fixed fee of 0.06 cents.

Litecoin was built using Bitcoin’s source code in 2011 by MIT grad and former Google employee Charlie Lee to create a “lighter” version of Bitcoin (...hence, the name). Many see Litecoin as the silver to Bitcoin’s gold.

Like Bitcoin, Litecoin uses a form of Proof-of-Work (PoW) mining to determine which group of transactions will be appended to the blockchain next. Litecoin uses a hash function called scrypt. This hash function was introduced as a way to make litecoin (LTC) mining more accessible to hobbyists than bitcoin (BTC) mining.

The Litecoin network processes transactions in 2.5 minutes, four times faster than Bitcoin’s processing time. The average Litecoin block requires 12 transaction confirmations and takes an average of 30 minutes to complete. Since the Litecoin network can process blocks four times faster, the total amount of LTC released is four times greater than BTC. This means the fixed amount of litecoin set to exist will cap at 84 million units, as opposed to Bitcoin’s 21 million units.

Litecoin also serves as a testing ground for Bitcoin software updates, given that it is more agile than Bitcoin because it stores a fraction of the monetary value. Due to Litecoin’s complementary nature to Bitcoin and the fact it has established a market for itself, it is often considered the first successful alternative cryptocurrency, or altcoin.

Litecoin is not the most exciting cryptocurrency, but it was intentionally designed to be this way. In a recent interview, Charlie Lee said “being boring is good for money... I don’t think it’s good to take the approach of ‘build fast and break things’ with money when you want it to be stable and actually work. And Litecoin has worked flawlessly over the past nine years.”

Since its inception, Litecoin has consistently ranked among the top ten capitalizations of the cryptocurrency market which makes it relatively stable compared to other altcoins created around the same time.

Using Litecoin is fast and cheap. Litecoin transactions take only 2.5 minutes and average transaction fees cost less than six cents. Plus, as a well-established altcoin, many merchants that accept BTC as payment also accept LTC. This makes Litecoin a good option for those looking to use crypto for daily purchases.

Litecoin reached its highest value in December 2017 at $420 per coin. Currently, it is sitting above $70 per coin. Major proponents of Litecoin are hopeful that an increase in usage and adoption on a greater scale will inevitably raise its value

Are you interested in buying litecoin? Find the closest CoinFlip ATM to you!